The Arthurian Saga: The Skystone (Book 1)

During the days of the decaying Roman Empire, the legions of Britain struggle to 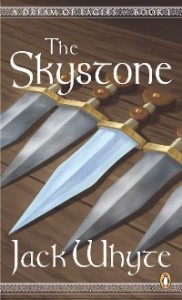 preserve the ancient principles of loyalty and discipline-virtues embodied in the Roman general Caius Britannicus and his friend Publius Varrus, an ex-soldier turned ironsmith. Whyte re-creates the turbulence and uncertainty that marked fifth-century Britain and provides a possible origin for one of the greatest artifacts of Arthurian myth-the legendary sword Excalibur. Strong characters and fastidious attention to detail make this a good choice for most libraries and a sure draw for fans of the Arthurian cycle.

[The following brief extract is spoken by Roman Centurion Varrus (turned blacksmith in retirement) describing how he met the love of his life while visiting his friends Quintus and Veronica in the rich countryside south of the Mendip Hills. His first love, Cassie, plays a role and his former commander in the Roman legion is Caius Brittanicus.]

…the declining sun threw long beams of golden light from the open shutters across the spacious room to spill in rectangles on the polished wooden floor and the solid, comfortable-looking furnishings, and I was conscious of a deep-seated feeling of well being….I declined a third cup of wine before dinner and excused myself [from our conversation regarding wood and silver craftsmanship] in order to go to my room and change. It had been a long time since I had met anyone with whom I felt so much at ease as these two, and I found myself whistling as I changed into my best clothes. I checked my chin for stubble, ran my fingertips through my short-cropped hair to make sure that it was dry and behaving as it should, and then, still whistling under my breath, made my way back directly to rejoin my host and hostess.

I had barely begun to move down the stairway from the bedchambers on the second floor when I became aware of what I can only describe now as blueness. There are moments in everyone’s life, usually spontaneous, seldom planned, that are seminal. In a brief flash of time, events occur that change the status quo, immediately and drastically, forever. One of those moments had overtaken me and overwhelmed me before I had time to even to realize that anything untoward was happening. I have tried for years to remember the exact sequence of events, actions and reactions that happened to me in the few moments that followed there on the stairway, but I have never been able to reconstruct my own thoughts clearly, or my reactions to what I thought I saw.

I remember sensing a blueness; it seemed to me that the entire wall below me and ahead of me had taken on a bluish tinge, almost as though a blue light were flickering nearby. I believe I had even turned my head slightly, looking for the source of the effect, before I became aware of the woman who was walking along the hallway below. Her back was toward me and she was within three or four steps of the open doors to the triclinium. I had an instantaneous and overpowering impression of eerie, almost frightening familiarity. I saw long, straight black hair, a tall, graceful form in a blue robe and a gliding style of walk that seemed to owe nothing to feet or legs.

I heard a roaring sound in my head, and I know I clutched at the handrail of the stairs for support as her name resounded first in my mind and then in the stillness of the hallway.

She stopped immediately, tilting her head forward slightly, as though listening, before turning back to face me, looking up to where I stood transfixed at the top of the stairs.

“Cassie?” I said again, my voice emerging this time as a croak. She did not speak, made no move. With a conscious effort of will, I began to move down the stairs toward her.

I remember thinking she looked far younger that she ought to, and not at all matronly. And then, as I approached her, I realized that she was not Cassie. She was a complete stranger with only a slight resemblance to the girl I had known so many years before. [They had met once, briefly, and fallen in love as only 14-year-olds can. Ed.] She had the same black hair and large blue eyes, and she wore the same color that Cassie had worn. But this woman was not Cassie. I stopped at the foot of the stairs and looked at her, and I knew that Cassie had always stayed a young girl in my mind and in my heart. This entrancing creature who faced me in silence was a woman in every sense of the word, and her beauty brought my heart up into my throat. I shook my head, whether to dismiss the last, lingering thoughts of poor Cassie or to begin an apology for having mistaken her, I do not know, but as I did so she began to walk toward me.

As she moved, I was aware again of multiple, simultaneous impressions of height, dignity, effortless motion, breathtaking beauty and blueness. I saw her as a vision, tall and slim, self-possessed and lovely. She walked with her head high and erect, her back held straight so that the fullness and thrust of her breasts were apparent even beneath the dark blue stole she wore over the long, paler blue draperies of her gown. Her clothes brought out the brilliant blue of her eyes, even in the shadowed gloom of the passageway, so that they seemed to blaze at me above the swellings of wide, high cheekbones. Long, dark hair, innocent of curl or artificial trickery, fell in straight cascades to frame her face and then swept back over her shoulders to hang behind her.

I had no idea who she was, but I knew that she was the woman I wanted above all others. My thoughts raced so that by the time she had moved two paces closer to me I had decided that she must be one of Veronica’s personal servants, although I had never seen or heard of a serving woman so beautiful. It didn’t matter, anyway. Mistress or servant, she was magnificent. Her beauty, mobility and dignity deserved my homage. I clenched my hand involuntarily over my breast in a military salute and bowed to her, moving backward and away from her, my eyes cast down as she approached me. I saw the tips of her sandaled feet come up and then stop directly in front fo me. In an agonized silence that seemd to stretch forever, I decided that I had to straighten up and look her in the eyes.

When I did so, I found her to be far more lovely than I had thought from a distance. The blue of her eyes was painfully deep and the kindness and welcoming warmth of her smile dried up my mouth. She spoke my name, and I marveled, not at her knowledge of my name but at the texture and the timbre of her voice, warm and soft and mellow and deeper than I would have expected. She reached out and took both of my wrists in her hands, and the only things in the world were her face and the warmth and softness of her hands.

“Luceiia, you’re here! What took you so long?” Veronica’s voice seemed to come from a great distance, and her words completed my confusion. I could see her standing in the open doorway of the dining room, and she was obviously speaking to the woman who was holding my wrists. But she had called her Luceiia? Could this be Luceiia Britannicus? The woman Quintas Varo had described as unwomanly? Unfeminine?

She ignored Veronica’s comment and kept her eyes and the smile directed full upon me. “Welcome,” she said. “We thought you might never come to our western land. I was debating with myself as to whether or not I should have you abducted and brought here, just to have you nearby when Caius comes home.”

I swallowed hard and worked my tongue to moisten my mouth. I know I said something banal and stupid, but I have no memory of the words. They must have been appropriate, however, because she released my wrists and walked with me into the dining room, where she embraced Veronica and Quintus. In the ensuing babble of conversation, I had time to collect myself and recover from the astonishing impact she had had on me. Nevertheless, although the memory of that first sight of her is an undying but hectic one, the passage of the next hour or so is a blank in my memory, a blue-tinctured haze of warmth and pleasure.

I know now from subsequent conversations with both Quintus and Veronica, that my condition was obvious and afforded them great hilarity during dinner, which they graciously concealed. Quintus admitted afterward that he had been warned by Veronica not to talk of Luceiia’s beauty. They had wanted to observe the effect she would have on me if I encountered her with no advance warning.